The actress sports minimal make up in the photos, making her look nice and fresh, in contrast to the glamorous beauty she displays in more formal occasions.

Netizens gave a positive response, leaving comments including, “You look cute”, “This is like an everyday photoshoot”, and “You’re beautiful”. 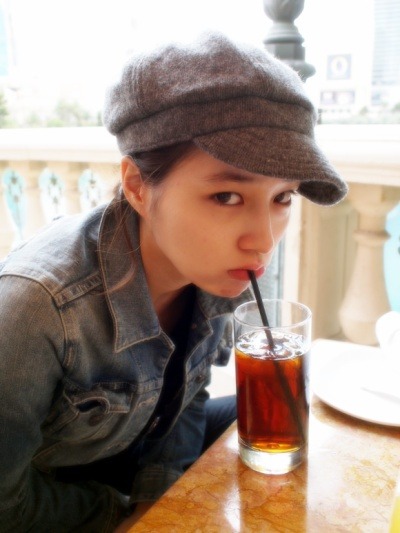 MBC’s ‘Playful Kiss‘ came to an end on the 21st of October. The drama went against some tough competition and suffered in the ratings department. Despite that, the show grew a small die-hard fan base and they were quite disappointed to see the show end so soon. However, that disappointment was somewhat turned around when there was news stating that Playful Kiss would continue airing via special episodes through video sharing website Youtube. The announcement also mentioned that it will have a different storyline than the TV version!

We have posted the 7th, 6th, 5th, 4th, 3rd, 2nd, and 1st specials before, and now check out the first part of making film video below!

Kim Hyun Joong stated, “Since Youtube doesn’t have strict restrictions, we were able to show a steamier love scene than on television. I believe that the couple will look more natural than on TV. Youtube is a place where netizens of the entire world can share and communicate. I hope ‘Playful Kiss’ can participate in the phenomenon and become an international icon.”

The making-of video for the drama “Playful Kiss” was revealed on Novemer 17th, featuring never-before-seen scenes and various NG cuts.

Since November 2nd, the Youtube channel for “Playful Kiss” has been uploading three special episodes every week, achieving impressive records in views and replies.

The special episodes for the drama will come to an end on the afternoon of the 18th with the final reveal of its second making video.

Actor Kim Hyun Joong commented, “I’m thankful for the fans that have been with us through this long time. I will greet you all once again with good performances and projects.”

Netizens left comments such as, “The set looks so lively,” “Kim Hyun Joong is even cool in the NG Cuts!,” and “I’ve fallen in love with how professional Kim Hyun Joong is.”

On November 17th (today) and 18th, making-of films including special NG cuts will also be released!

Kim Hyun Joong states SS501 will not be disbanding

SS501’s leader Kim Hyun Joong strongly affirmed that that SS501 will not be disbanding.

In a recent interview, he stated, “With our members branching out into different companies, many wonder whether SS501 is disbanding or not. We were only able to move companies because we had confirmed with one another that we would continue to work as a group under the name of SS501.”

He continued, “During that time when our contracts expired, there was no company that would take in all five of us.”

Regarding SS501’s future activities, he answered, “For now, we’ll do solo albums for a bit. We’re planning to get together for a performance. Due to our companies being different, it’s difficult to get our schedules coordinated, but it will get done.”

Kim Hyun Joong concluded the interview by expressing his friendship with the other members. “I get in contact with the members every single day. Hyung Joon once said that I ignored one of his text messages at the press conference for his musical, but that’s not what happened. I was in China for the‘Guangzhou Asian Games‘. I called him right away after the event.”

With the Wonder Girls leading the global girl group trend, their agency (JYP Entertainment) has revealed that they will continue their overseas activities.

According to their representative, the girls will be holding concerts all over Asia, including Korea, but will officially resume their U.S. activities next year.

He stated, “The Wonder Girls are busy up to the end of the year with ‘MULA‘ and ‘JYP Nation Concert.’ Since their schedule for next year is packed with American activities, it will be difficult to see them in Korea for the time being.”

CNBLUE has a ghost in their dorm’s couch?

CNBLUE member Lee Jungshin played a cute prank on fans yesterday, posting a photo on their official Twitter of a supposed ghost that is haunting their couch.

They tweeted, “Hello. I’m the couch ghost living in CNBLUE’s dorm. Lee Jungshin is currently sprawled out tired. This leg… Is it okay if I take it?”. A picture was attached showing a message on the couch that said, ”Give me my leg TT.”

Fans commented, “It’s totally funny. Who made this cute message,” “I want to haunt their dorms as well,” and “Jungshin’s long legs are incredible.”

A photo of 2NE1’s Minzy at the hair salon is receiving a lot of attention on community fan sites. A fan posted the pictures with the title, “Bean Minzy“, but others are saying she looks more like a koala.

The photos showed Minzy in a white gown with a fluffy hair style, and an expression that seemed to tell us she had something to say.

Netizens commented, “She looks like a koala. Keke,” “Cute. Keke,” “Is she supposed to be not pretty?”, and “If she wasn’t a celebrity…”.

“And in this corner…”: Boxer Dara and her cookie mouth guard

The November 16th airing of Mnet’s “2NE1 TV“, the final episode revealed what went on behind-the-scenes for Dara’s surprise birthday party on the 12th.

In order to pull off the party and the hidden filming, CL, Minzy, and Bom had a secret rendezvous in the dressing room before Dara came in to change. Immediately after changing, Dara put a chocolate cookie in her mouth and posed as a boxer for the camera. Although she gave a menacing scowl, Dara still looked very cute with her distinctive facial expressions.

One netizen complimented, “She can pull off ten thousand different facial expressions”, expressing their endearment of Dara’s acting.