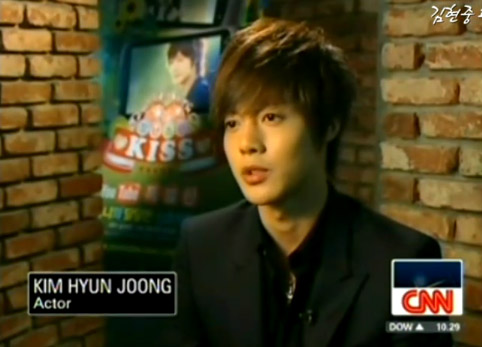 Earlier this week, we revealed that reporter Anna Coren from CNN’s Talk Asia program would be doing a feature series on Korea due to the country’s hosting of the G20 Seoul Summit this week.

An interview was conducted with actor Kim Hyun Joong, who is the male lead for the international-hit drama, “Playful Kiss“. Since “Playful Kiss” is currently releasing special web episodes throughYoutube as a response to the high demand from fans, Kim Hyun Joong discussed the significance of Youtube in spreading awareness about Korean culture.

His cut from the program has just made its way onto the net. Check it out below!

Last week, we reported that ‘Playful Kiss’ star and SS501 leader Kim Hyun Joong would interview with CNN’s Anna Coren for Talk Asia. It was also revealed that Super Junior’s Choi Siwon andLeeteuk also interviewed with Anna Coren and a preview image (seen above) from the interviews was recently revealed via TV Daily.

CNN’s Talk Asia has put a lot of focus on South Korea for the past few episodes as South Korea is scheduled to hold the G20 Summit on November 11-12.

Kim Hyun Joong will be interviewed about the success of ‘Playful Kiss’, as well as his thoughts on acting alongside female lead, Jung So Min.

Additionally, Anna Coren will be asking producer Song Byung Joon about insider knowledge for successful productions. She will also seek informed answers from the Google Director about the impact of Playful Kiss special web episodes on Youtube.

CNN became greatly interested in ‘Playful Kiss’, ever since the first Youtube special episode received over 520,000 views in just two days after its release.

Anna Coren will also talk to Super Junior’s Choi Siwon and Leeteuk and their recent foray into social media such as facebook and twitter, establishing contact points with a foreign audience.

In the past, CNN Talk Asia interviewed Rain, Lee Byung Hun, and most recently Tablo of Epik High. This episode will also talk about South Korea’s food and culture and is scheduled to air on November 12th.